The Tour ‘struggles’ through Ambleside 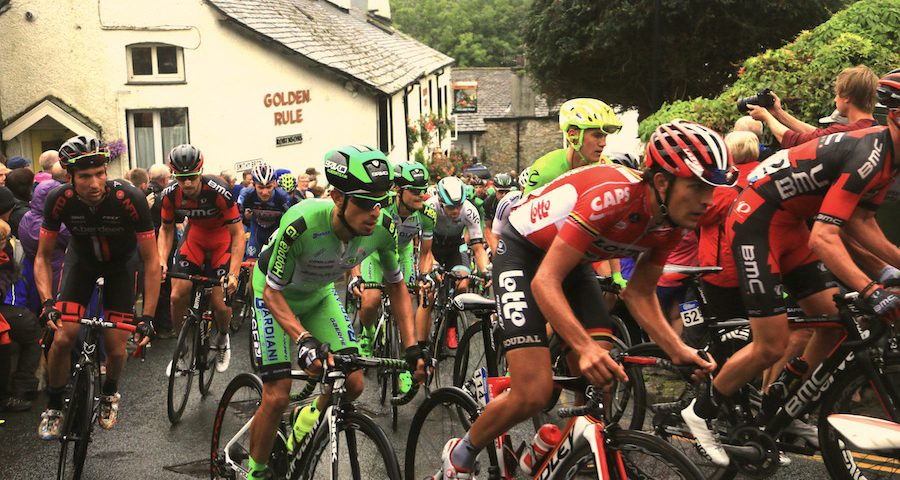 They came to see cycling legends Sir Bradley Wiggins and Mark Cavendish, but at the end of a momentous day for British cycling, the real star of the show was Ambleside and the narrow road up the fearsome fellside above it known as The Struggle. As a test of a professional rider’s ability to scale inclines of 25% (that’s 1 in 4 in old money!), The Struggle will take some beating.

Don’t just take our word for it. Sky rider Nicolas Roche, son of former Tour De France winner Stephen Roche, said on TV after the stage: “It was definitely a struggle, but I think there should be a mountain-top finish there one day!”

There was a sense that something special was brewing as Ambleside started filling up with visitors earlier than even on a bank holiday weekend, and with the road to Kirkstone Pass closed to motorised traffic from 9am there began a steady stream of pedestrians and cyclists heading up the three-mile climb to the third highest public house in England (at 1.460ft).

Down in the town 200 or more cycling fans watched the race unfold on a huge screen as the riders raced through Keswick, sprinted in Grasmere and headed towards Ambleside.

One by one motorcycles with blue flashing lights came up the hill; then the lead cars . . . .

then a huge roar as the leading group of cyclists charged up the steep incline. The charging didn’t last long as the gradient increased and the lactic acid build-up in tired legs kicked in. And then they were gone and all eyes turned back to see how far the chasing group were behind: 20 seconds . . . 30 . . . 40 . . . then an even louder roar as the unmistakeable figure of sprinter extraordinaire Mark Cavendish appeared – leading his team-mate Steve Cummings like a man possessed.
The wily Cummings later caught up with the leaders on the descent to Troutbeck Bridge and broke away with Belgian rider Julien Vermote between Bowness and Plumgarths. The two came into Kendal neck-and-neck, turned right onto the brutal finishing hill of Beast Banks with barely a wheel between them, and the massive crowds lining the run-in shouted and hollered for an English win. It was not to be; Vermote rode clear in the final 250 yards and claimed the race leader’s yellow jersey at the end of an extraordinary day of cycling.